Wasa, founded in 1919, is today the world's largest manufacturer of crispbread. Wasabröd was founded in Skellefteå in 1919 by baker Karl Edvard Lundström under the name AB Skellefteå Spisbrödsfabrik and in the early '30s moved the company to Filipstad where they still have its factory. The name Wasa was taken from the Swedish king Gustav Vasa whose picture adorned the early bread packages. Since crispbread is traditionally baked by rye, Wasabröd set a sales slogan, "Wasabröd gives rye in the back", which Wasa used for a long time in their marketing. A clear focus of Wasa and their various crispbreads is appetizing; crispbread should appeal to both sight and taste.

Many of Sweden's most famous crispbread brands bakes at Wasa

After its inception in 1919, the business moved to Filipstad in 1931. To this day, most of the Swedish knäckebröd market's most well-known brands bakes in Filipstad. In 1933 Wasa launched the first knäckebröd baked-on assembly lines, Wasa Husman. Still, Wasa Husman is a real bestseller. Another of Wasa's classics, Wasa Breakfast, was first baked in 1965. 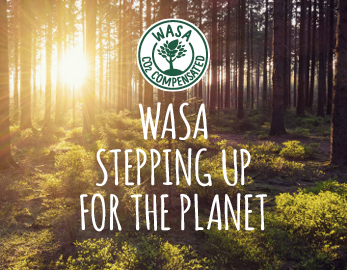